Last Thursday evening (3rd May), Brixton’s O2 Academy was most definitely the place to be, as Plan B and his band touched down in South London to play the last show of his UK tour. With support from Karl Lokko and Hak Baker, it was a night not to be missed! 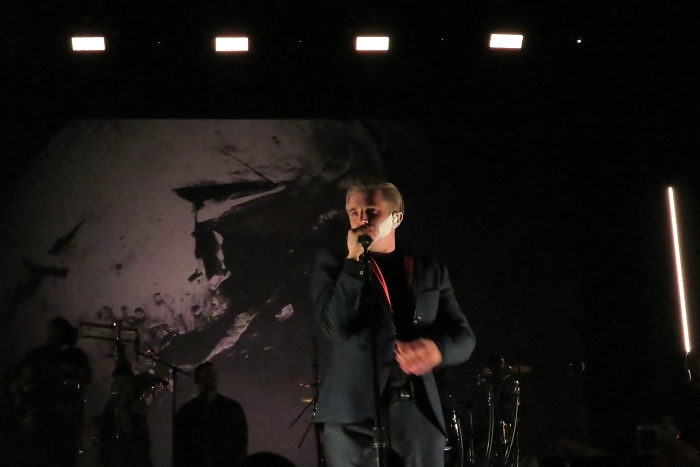 A gust of smoke flooded the stage and poured into the standing crowd, cueing the entrance for the man of the night and instantly turning a restless venue of fans into screams of excitement and roaring cheers. Bursting into his set with ‘Grateful’ and ‘Heartbeat’, both taken from his brand new album Heaven Before All Hell Breaks Loose, Plan B had the entire venue in the palm of his hands in an instant. It was going to be an incredible night for sure.

Although it has been 5 years since Plan B—real name Ben Drew—last toured the UK on his epic 2013 Grindhouse Tour, for the entire time he occupied the stage, it felt like no time had passed at all. There was no question to the fact that his energy was on point and infectious to his crowd. As he rocketed through each track, his fans did too. Both belting out lyrics old and new, jumping, dancing and moshing through his passion-fuelled hits.

The first throwback of the night was to his Strickland Banks soul days, for a performance of ‘Prayin’, which was laced with high-pitched screams and sing-along vocals from the sold-out Academy. Proving that no matter how many years pass, or how often we hear Plan B’s older records, they still remain timeless works of art.

His current style and image has evolved noticeably—just like his music—except this time around it feels harder to put your finger on the character he presents to us. With slicked-back-hair dyed a silvery-white colour, a half mask painted around his jaw and a new bold, futuristic take on a suit; Plan B appears to dip into sci-fi and theatrical designs for inspiration. Though it’s when he bounces back to his new album with performances like ‘Stranger’, ‘Queue Jumping’ and ‘It’s A War’ that we see the full scale effect of his transformation. With his new use of different genres—resulting in shifts of energy and atmosphere throughout the current set—we were brought into a melting pot of different worlds, sounds and creativity, from a musician that truly is an artist.

Throughout the night, Plan B broke away from his new collection of material to treat us to some much-loved older favourites, such as ‘She Said’, ‘The Recluse’, ‘Lost My Way’ and a reggae version of ‘Welcome To Hell’. As well as dedicating an acoustic version the hard-hitting ‘End Credits’ to a friend that had sadly passed away, bringing real loss and reality to the deeply felt tune.

The crafts of Plan B’s past still shine as bright as they did when they were fresh from the studio. However, in an effort to freshen up a selected few and make them even more special and personal, Plan B stripped things back and took full control on stage. With nothing but a guitar in his hands and a song fully equipped with charm and heart-melting tendencies, he sent fans into a gush of delight, with an acoustic delivery of ‘Love Goes Down’. It was beautiful indeed. Snapping the venue out of their swooning state as quickly as we feel into it though, Plan B ordered everybody to “listen the f*ck up”, before strumming his way into the raw and brilliant ‘Kidz’, from his 2006 debut album Who Needs Actions When You’ve Got Words.

Plan B was full of praise for his home city during the gig: “I love London—I’m so proud to be from here” he shared, which was followed by screams of agreement from his fans. It was his performance of the incredible ‘Ill Manors’ that revved the energy up to new heights; stirring up mosh pits among the Brixton crowd. You could see the pure joy and glee on people’s faces, as their bodies bashed and slammed together. While some fellow gig goers used the hectic setting as a cheeky opportunity to get to the front, for better viewing and safety. The energy was mental, but so bloody brilliant too. “Who wants one more f*cking tune?”, Plan B shouts, before encouraging fans to chant “one more tune… one more tune”. It was then that the power-packed ‘Stay Too Long’ begun. Sadly it signalled the end of the show, but not before Plan B ensured the energy peaked to new heights once more.

As always, every minute spent at one of Plan B’s gigs is special; he pours his heart and soul into producing a good and memorable show for his fans and every time, without fail, he does. We just hope that the wait isn’t too long before he is back on-stage, doing what he does best. Until next time, Plan B!