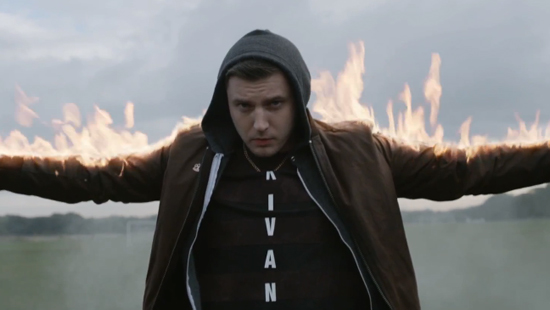 ‘Playing with fire’ is the latest video turned single to be taken from Plan B’s Number 1, Mercury Prize nominated album ‘ill Manors’– the soundtrack which compliments his directorial film debut of the same name.

‘Playing with Fire’ tells the story of Jake – “a kid off the estate”. As he falls into the wrong company, when his weakness as a ‘follower’ who’s desperate to impress sparks the attention of gang leader Marcel. Blinded by the glamorised and strong appearance of his new found ‘friends’. Naive Jake willingly goes to any lengths in hope to earn a place for himself as part of the pack, and reap the perks that appear to come with such life that Jake’s choosing to lead. But at what price?

“One day you’ll learn, when you get burnt. But by then it will be too late for ya… When the fire spreads and burns don’t you know? your playing with fire!”

As flames spark and begin spreading. The video sees Plan B and the tracks featured artist Labrinth doing their thing. With an extra appearance, and additional vocals from Etta Bond.

As Lab takes to a burning piano, flaming back flips, burning basketball hoops and fire starter BMX riders feature in between original clips from the film, that’s intercut throughout. All leading to the most eye catching scene of the video, which sees Plan B looking rather HOT!

Check it out Here…