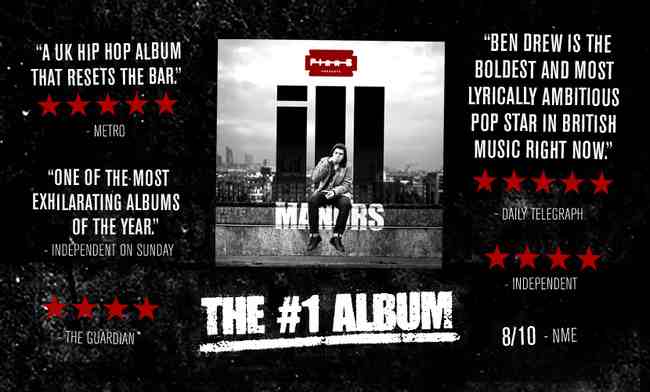 Plan B has returned to The Charts with his much awaited Third Album – ill Manors.

Not only that but Mr. Drew has scored his Second Number 1 album, with ill Manors going straight to number 1 in the Official Album Charts… Congrats Ben!!  Featuring Guest appearances from Labrinth, Kano, John Cooper Clarke and Takura Tendayi it is clear to hear that Plan B has raised the Bar once again.

To celebrate the Release of his New Album Plan B took to the stage at South East London’s Suffolk Street  Car park, that was converted into a venue for the night, for a ‘Special Album Launch Party/Gig’. An hour Long set which saw Plan B, as well as Labrinth, Etta Bond, Kano, John Cooper Clarke and Takura Tendayi perform New iLL Manors tracks to a crowd of special guests and Competition Winners.

And Throughout, Ben’s performance was intercut with clips from the iLL Manors film which projected onto the venue’s brick walls.

We was also lucky enough to attend this one off exclusive event, and what an experience it was.

There is no denying that Plan B is one extremely talented Individual, And we believe Ill manors (Soundtrack and Film) is only a taster on what is still to come.